Created under the token of the ancient Mayan greeting In Lak’ech Ala K’in (You Are Another Me), the 7th edition of the Bucharest International Experimental Film Festival BIEFF, held between March 28th and April 2nd, 2017, was a success and consisted of outstanding films raising debate around the notion of border and proposing “a denial of barriers – those between individuals, but also those of the cinematic language.”

This year, the international competition focused on five major themes – You Are Another Me, The Politics of the Body, Searching for Transcendence, The Alchemy of the Frame, Cutting the Cord. There was a thorough selection of visually stunning, awe-inspiring, bold and thought-provoking short films dealing with the pressing challenges of the present while inviting to meditation and empathy: (1) the image of the other as perceived in relation to recent social and political contexts; (2) identity and self-presentation, gender stereotypes, the culturally-constructed ideas and social norms defining what is normal/ acceptable/ beautiful; (3) recollected or immediate experiences beyond the known reality; (4) deconstructing and creatively rethinking the cinematic image and discourse; (5) family bonds and discontents.

The jury was formed by Nora Molitor – Representative of Berlinale Forum Expanded and Arsenal – Institute for Film and Video Art, Paolo Moretti – Selection Committee member of FIDMarseille and program advisor for ​​Visions du Réel, and Boglárka Nagy – the programmer of Elvire Popesco Cinema in Bucharest and responsible for the film projects of the Institut Français in Romania.

The Grand BIEFF 2017 Prize was awarded to Hayoun Kwon, the director of the animated film 489 Years, based on the experience of a former South Korean soldier. The artist explains in an interview her choice for animation, the use of which, in addition to the elements of documentary film, contributed to the jury’s decision: “By working with animation, I am able to play with fiction and fantasy within a forbidden area and my artistic work is an extension of hypothetical possibility. I am able to go beyond the limit of my reality. By the particularity of animation which is distinguished from reality, I use the animation as a means to overcome my political situation.” 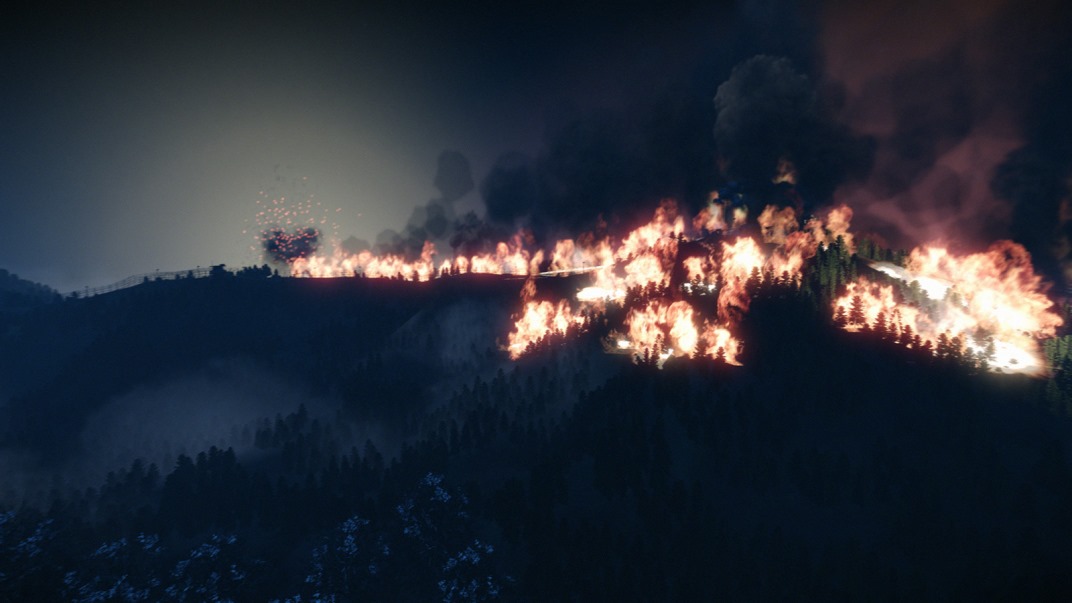 Diogo Costa Amarante won the Best Director Award for the poetic and narrative montage and the bold approach to death and its awareness, from a mother-son relationship perspective, in his film Small Town, also the Golden Bear winner of the Berlinale Shorts 2017. 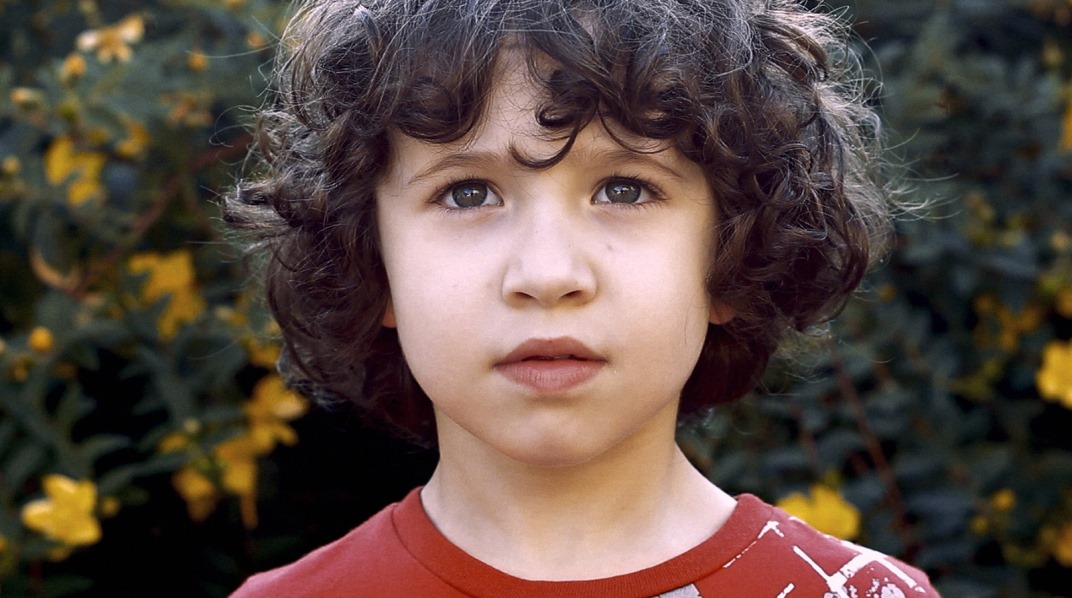 The Best Visual Concept Award was received by Ronny Trocker, the director of Summer, who in an interview for Yellow Bread Shorts discusses his inspiration for the film – Juan Medina’s photograph taken in 2006 on the beach of Gran Tarajal – and choice of medium: “Photography is able to tell a story by showing only one single instant. I wanted to keep this characteristic and combine it with the way cinema tells stories, based on duration, multiple images (editing) or different points of view. It was an experiment and I didn’t know the result, but I really like the effect of alienation the film provokes in a part of the audience. I like when they’re not sure whether it’s true or not what they are seeing. (…) But, I think that, in the end, the film is less about refugees, but more about us and our cynical passivity. And – why not – also a bit of an auto-reference about us producing this images.”

Luiza Pârvu and Toma Peiu won the Best Romanian Director Award for Sisyphus 2.0, made entirely out of surveillance footage available online, film which according to them “is meant to mirror existentialist philosopher Albert Camus’ text, originally published in 1942, in present day’s reality.”

Gabriel Abrantes also received a special mention from the jury for A Brief History of Princess X, while the audience selected two films – Peep Show by Rino Stefano Tagliafierro and I Made You, I Kill You by Alexandru Petru Bădeliță.

Although not winners, the following are some of our favorite films from the competition: Still holding still by Sarah Vanagt, «[…] craving for narrative» by Max Grau (watch it here), recently interviewed by Dissolved Magazine, Foyer by Ismaïl Bahri, Over by Jörn Threlfal (watch it here), Our Legacy by Jonathan Vinel in collaboration with Caroline Poggi, Critical Mass: Pure Immanence by Anne de Vries (watch it here), and If It Was by Laure Prouvost.

Part of BIEFF #7 we had the opportunity to see Cinedans Amsterdam – Emotional Bodies special programme, in partnership with Europe’s main dance-film festival, Cinedans – Dance on Screen Festival Amsterdam, with three mentions we’d like to highlight: Paralysis, in which performer and filmmaker Karel van Laere was fastened onto a table for 24 hours “in order to experience what it is to be completely paralyzed”, She/Her by Sonja Wyss, “a film about the balance of power and the deep underlying emotions of a mother-daughter relationship: the uncertainties, manipulation, dependence and ultimately love”, and Voices of Finance by Clara von Gool – with monologues based on the ‘banking blog’ Voices of Finance by author and publicist Joris Luyendijk – The Guardian, “the inspiration and foundation for a film that expresses an urgent issue in an artistic and stylised form: the anxiety of bankers, their Angst, as a perfect matrix for choreography.”

She Her – Teaser from sonja wyss on Vimeo.

Nostalgia for the Future: Manufactured Histories was the special programme in partnership with Arsenal – Institute for Film and Video Art Berlin, which included titles from the Berlinale Forum Expanded selection. Our special mention here is In the Future They Ate From the Finest Porcelain by Larissa Sansour and Søren Lind.

In the Future They Ate From the Finest Porcelain (trailer) from larissa sansour on Vimeo.

Finally, the programme Golden Shorts – Best Films in Major Festivals has brought to our attention The Fullness of Time (Romance) by Manon Coubia, Timecode by Juanjo Giménez and Eden’s Edge (Three Shorts on the Californian Dessert) by Gerhard Treml and Leo Calice (watch an interview with them about the film here). 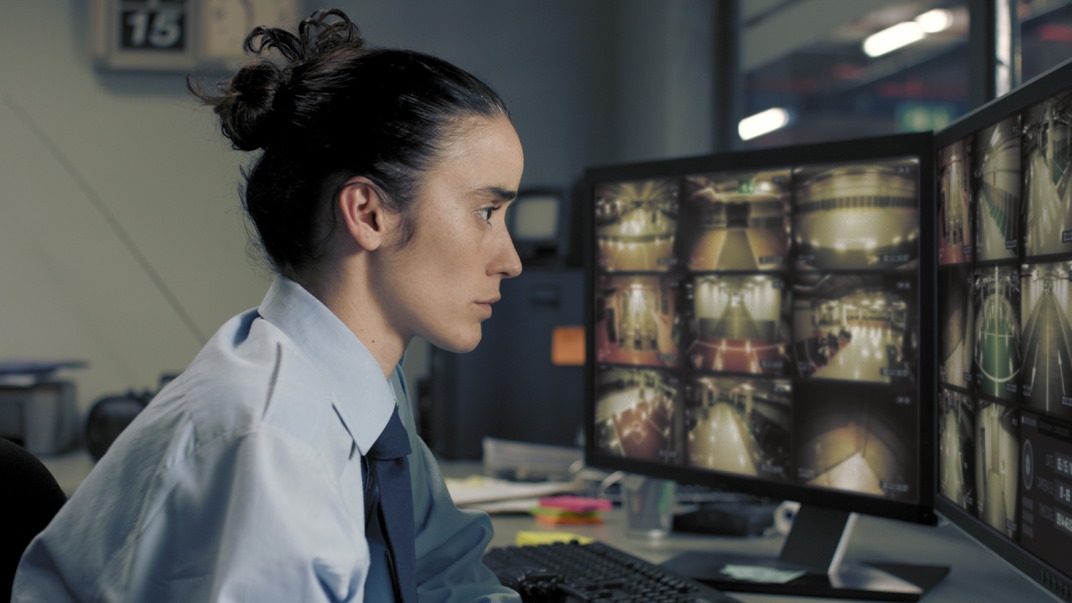 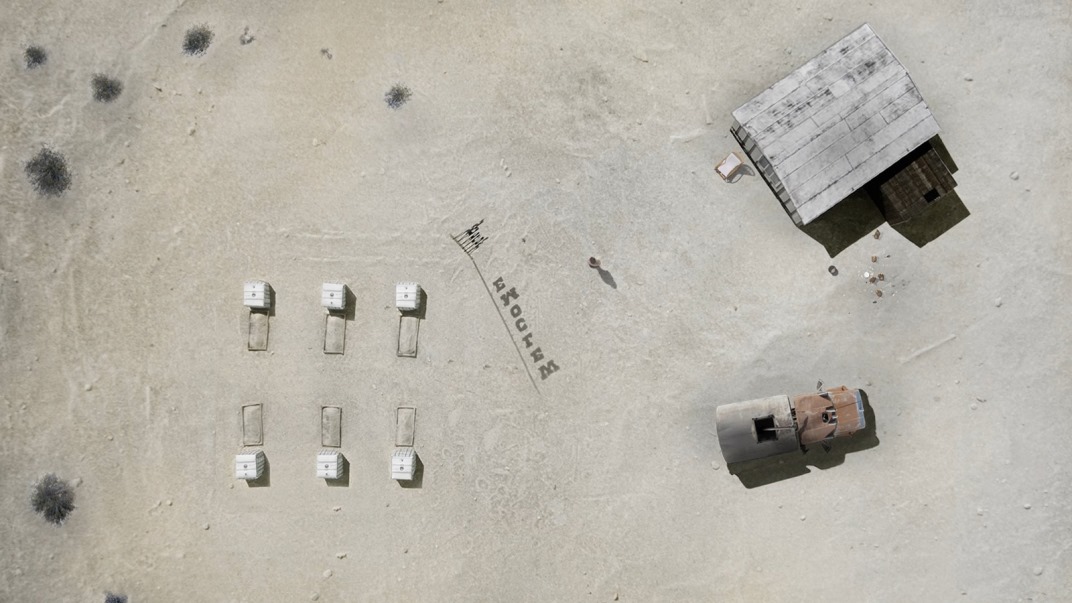 Previously presented as a 13-screen video installation and with its feature film premiere at the 2017 Sundance Film Festival, Manifesto by German artist and filmmaker Julian Rosefeldt “pays homage to the moving tradition and literary beauty of artist manifestos, ultimately questioning the role of the artist in society today.” In the film, actress Cate Blanchett performs a homeless man (scene corresponding to Situationism), a broker (Futurism), a worker in a garbage incineration plant (Architecture), a CEO at a private party (Vorticism/ Blue Rider/ Abstract Expressionism), a tattooed punk (Stridentism/ Creationism), a scientist (Suprematism/ Constructivism), a funeral speaker (Dadaism), a puppeteer (Surrealism/ Spatialism), a conservative mother with family (Pop Art), a choreographer (Fluxus/ Merz/ Performance), a newsreader and reporter (Conceptual art/ Minimalism), burning fuse (Prologue) and teacher (Epilogue). In an interview for No Film School, Julian Rosefeldt talks about the genesis of Manifesto and his collaboration with Cate Blanchett.

Also, Julian Rosefeldt spoke to Dazed about the film: “Keep in mind that we now have a massive global art scene with sophisticated means of communication. In such a world, it’s difficult to provoke, because you’re free to say whatever you want to say, at least in the Western context. Back then, the entire global art scene was probably as big as Berlin’s current art scene. Within that realm, it was a very small fraction of people that were going against the prevailing art tendencies. Those manifesto writers were all part of a tiny minority of avant-garde artists. (…) The beautiful discovery I made while working on these manifestos was that these artists had been seismographers and visionaries of their time, making prophetic readings on their societies. So much in their texts remains absolutely relevant.” 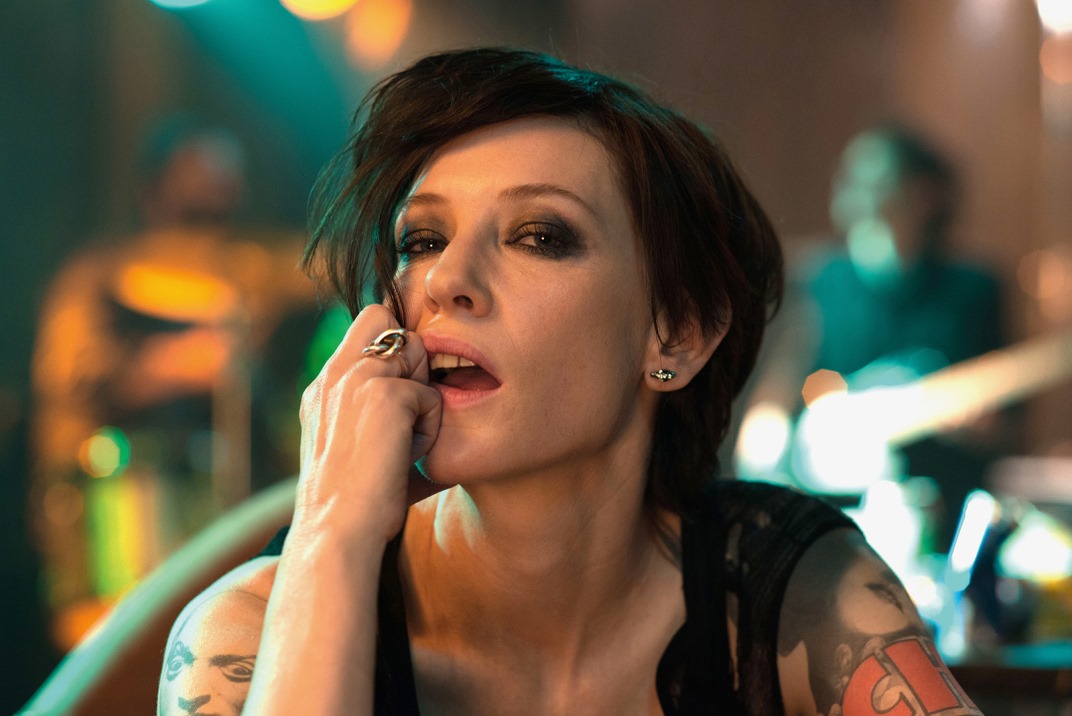 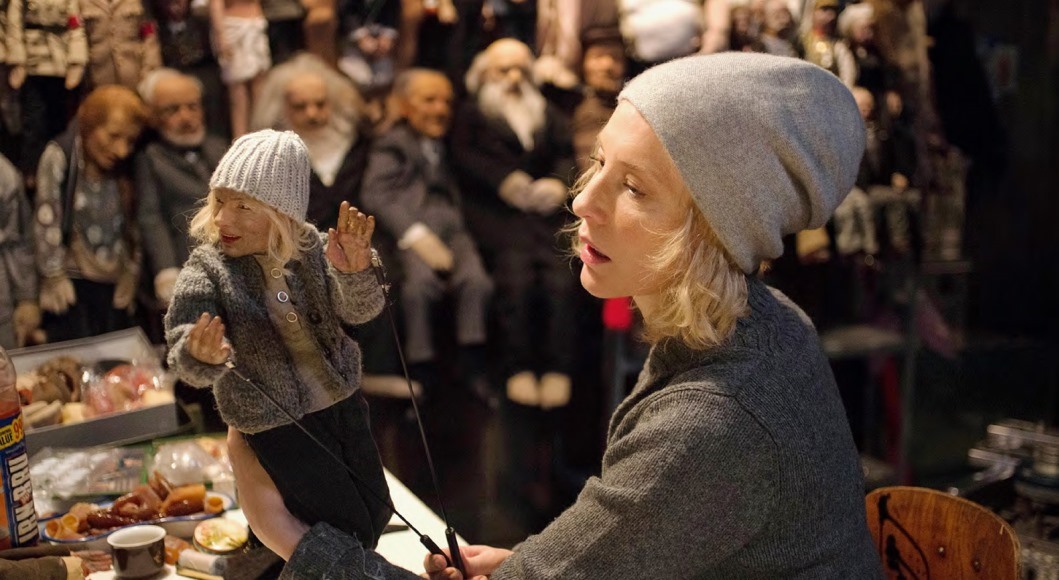 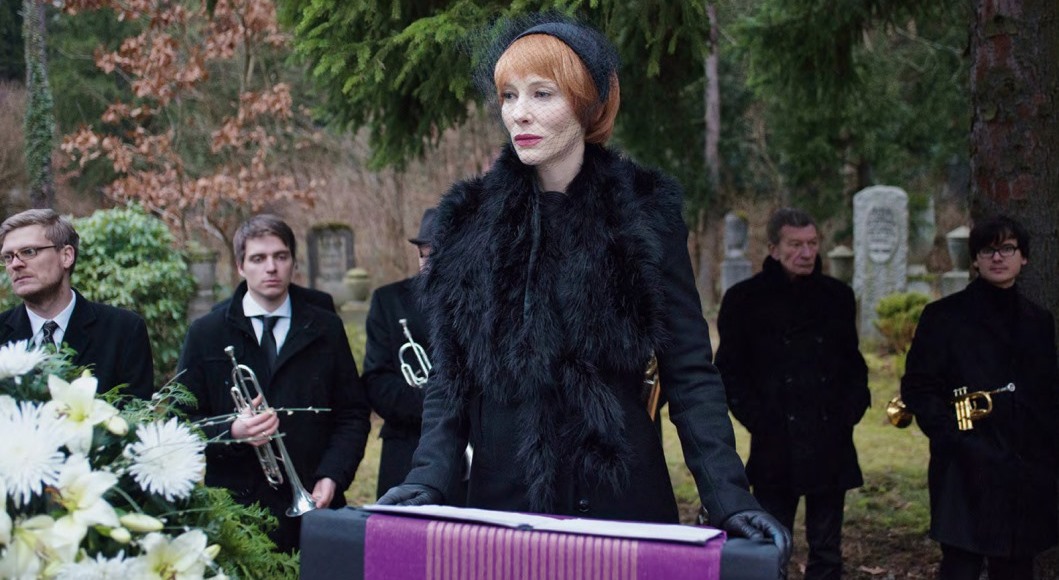 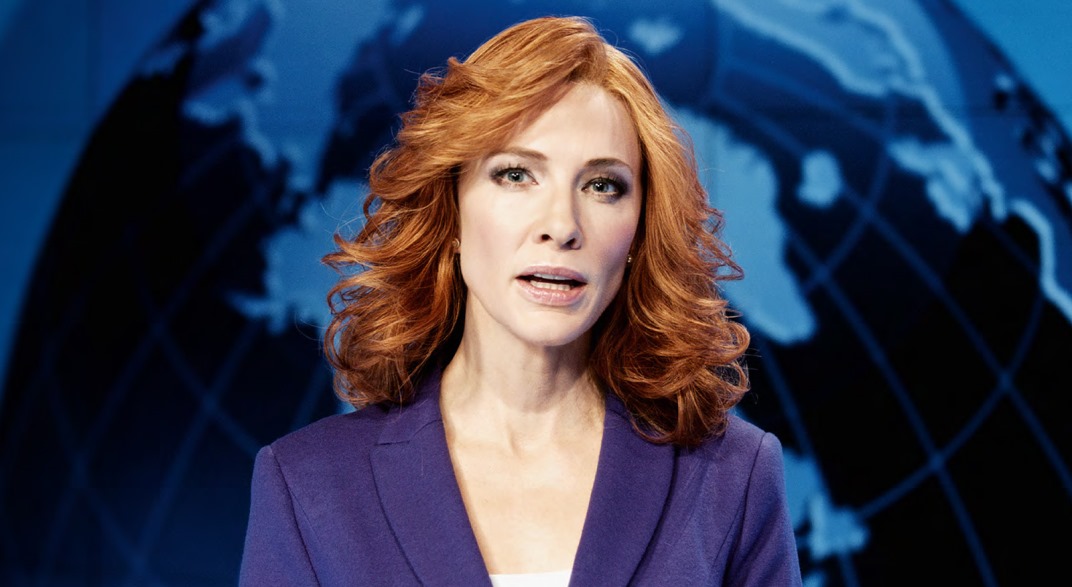 Images and videos courtesy of BIEFF, unless otherwise noted.